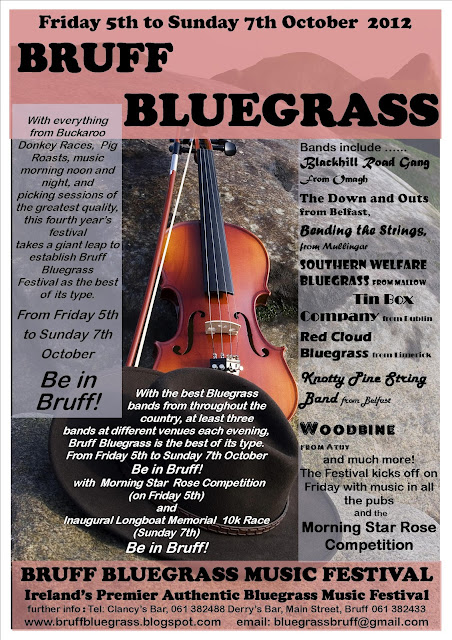 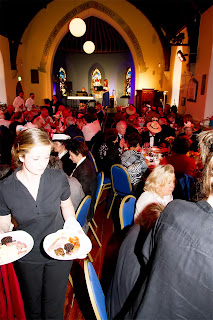 Thank you so much ......  to all our sponsors, our friends and supporters. Katie O'Kelly in "Joyced!" was wonderful and a fitting end to the festival/ Maybe a reading group between now and next festival.............      check in every now and then!

Happy Bloomsday to one and all.........    many thanks to Bruff Speech and Drama children for a wonderfull performance of My Fair Lady this morning!
at 14:35 1 comment:

One day to go to Bloomsday. We have started our festival well with a wonder full Tea Dance yesterday afternoon. Noel Cronin entertained his audience superbly and there were great contributions from the audience! Today starts with Live95fm broadcasting from Clancy's Bar, and after entertaining the crowd at the Milk Market venue in town, we return to Bruff for our wonderful Eve of Bloomsday Concert (full details below)
at 01:42 No comments:

Suzanne Murphy to star in Bloomsday Concert. Important to book tickets now, for this and all other events!

Bloomsday 2012  14th to 17th June inclusive ( details of events and prices Very important to book tickets in advance to be sure of admission  click here) Bloomsday itself (16th June) falls on a Saturday.  For the very latest news click here.  The Festival includes an Edwardian Tea  Dance on Thursday 14th June, A Gala Concert with Suzanne Murphy on the 15th of June, Voices of Limerick and Michael Holohan
Bloomsday itself starts with an opening ceremony, a  Joycean Breakfast, Gorgonzola and Red Wine at Clancy's, The National Butcher Boys Bicycle Race, The Bloomsday in Bruff Lecture (given this year by Gerard Hanberry), The Annual Dinner and on Sunday 17th we have a performance of Joyced ! We are also organising an event with Limerick Writer's Centre at The Milk Market Venue on the 15th June

Click on red text below for further information on artistes concerned!

More details to follow over the next few days but we announce the exciting news that the Gala Concert will see a visit from the renowned Voices of Limerick Choir, the return of Michael Holohan after his great reception last year, and we are delighted to announce a performance by Suzanne Murphy at the Concert. Other highlights this year include a perfomance of "Joyced!" by Katie Kelly on Sunday 17th June, another great Joyce Lecture and an expanded Butcher Boys Cycle Race. 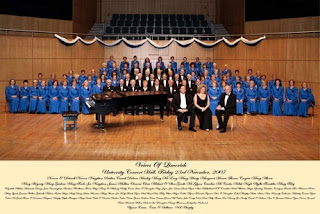 Joyce collection published free on web
THE NATIONAL Library of Ireland has brought forward plans to publish a major collection of James Joyce manuscripts free on the web after a Joycean scholar published the material in editions priced at up to €250.

It is the first such Joyce collection to be opened to the public in this way.
Click here to go to collection
The library’s move comes in response to the publication by scholar Danis Rose of all the manuscripts, in editions priced between €75 and €250. Mr Rose has also claimed he is now the copyright holder in the EU of these manuscripts.
The director of the National Library, Fiona Ross, said yesterday that plans to put the manuscripts online had been under way for some time.
The collection includes notes and early drafts of Ulysses and Finnegans Wake, as well as earlier notes by Joyce from between 1903 and 1928. Two of the notebooks include the earliest surviving sets of notes, and there are drafts of nine separate episodes of Ulysses. The handwriting in the manuscripts matches Joyce’s known handwriting from the different periods in his life and includes his use of coloured crayon lines and Xs through certain writing.
More about this on full page : click here to go there!
at 10:10 1 comment:

This February 2nd, to celebrate the 130th birthday of James Joyce and the 90th anniversary of the publication of Joyce’s mighty novel, Ulysses, author Frank Delaney reads from Ulysses to the public in Madison Square Park, and through video, to the world. The year 2012 has also seen the release of Ulysses into the public domain, an event much anticipated by Joyce scholars and aficionados, long hampered in their efforts by the litigious Joyce estate. Ulysses, even with copyright restrictions, has through the years inspired readings, reenactments, and even twitter events the world over, and Delaney's reading is surely a harbinger of many inventive interpretations to come.
Delaney rails against interpretations of Ulysses that obfuscate rather than clarify the details, references, meaning, and intent of the book, and instead has shown, in his Re:Joyce podcasts, where every Wednesday he deconstructs the book sentence by sentence in episodes lasting 5-7 minutes, that Ulysses can be absorbed, understood and embraced with no loss of intellectual value. Ulysses, Delaney maintains, is a vastly enjoyable and accessible novel, “a book to get lost in...and discover each day something new.”  Launched on Bloomsday 2010, The Re:Joyce podcasts have passed 300,000 downloads as of last week. They have been hailed by listeners as “the people’s Ulysses," and have been covered by publications such as NPR, The Economist, and many more.
at 10:59 No comments: 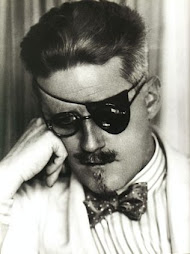 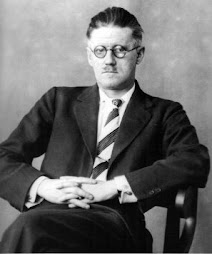